"Find the seed at the bottom of your heart and bring forth a flower." It was this credo that was the guiding spirit behind the Investiture ceremony held at National Public School, Indiranagar, on Friday, 17 June 2016. The first momentous event of the new academic session, Investiture was a reminder that enterprising, zealous youngsters, when groomed properly, grow up to become able leaders of tomorrow. It highlighted the deep faith and trust that are reposed in the members of the Student Council who help the school administration dispense its duty with elan. The chief guest for the event was Dr. Bindu Hari, Director, Academics, NAFL, TISB and NPS Group of Schools.

The school atmosphere was charged with nervous apprehension and an eager anticipation as each student from Classes 9 to 12 secretly prayed for a badge. The ceremony began with the school prayer, the customary introduction and welcome address followed by an inspiring talk by Dr. Bindu Hari. She exhorted the children to actively participate in community development, job generation and similar welfare-oriented activities that would change their role from 'passive consumers' to 'active contributors' to this nation; as responsible citizens who would eventually uplift the 'have-nots' and would be "the beacons of hope for this country, the promise and the potential of this country." Dr. Bindu conferred the most elite posts of the School Prefect and the two Vice-Prefects on the designated students.

Thereafter, faculty member Ms. Jayanti Shrivastava delivered a speech which reinforced the idea of "when there's a will, there's a way", through an inspirational narrative on Michael Jordon.

The next set of badges was those of the House Captains and Vice-Captains which were bestowed upon the deserving allottees by the Principal Ms. Shantha Chandran. A wave of applause and celebration reverberated through the air as the members of each House jubilantly welcomed their new leaders.

The children waited with bated breath for the various Association portfolios to be announced and conferred. The Vice-Principal Ms. Shirin Jeyakar honoured the badge-holders of the Math, Tarang, Music, Dance and Drama Associations. In keeping with the spirit of new hopes and new responsibilities, a melodious medley of songs, 'Aashayein...', was presented by the students of the senior school. Next up were the badges for the Science, Commerce, Literary, Hindi and Sanskrit Associations which were given away by the Coordinator Ms. Ida Selvakumar. This was followed by the MUN, Debate, Magazine and Art portfolios which were announced and bestowed by the Coordinator Ms. Amritha Nirmal Kumar. Scores of NPS alumni, who had specially come down to attend the celebrations, clapped and cheered for the newly elected leaders of their alma mater.

The final set of office-bearers was announced and pinned by the Coordinator Ms. Anuradha Krishna which included the Quiz, Cyber, Photography and SEWA Clubs. All the leaders were greeted with a triumphant applause which gave a fillip to their already soaring spirits.

Formalities over, the audiences were treated to a peppy dance performance put together by the middle school children. The event culminated with the newly anointed School Prefect addressing the gathering. He quoted Steve Jobs and urged the students to dream, to not bow down before failure and instead, have faith in themselves, take a chance in life and follow their passion. It was a day marked by renewed commitments, sincere resolutions and lofty visions. 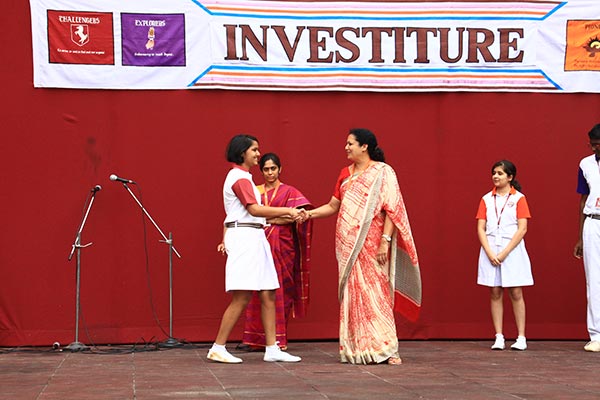